Pickathon is an unrivaled paradise. There is nothing like driving the fifteen minutes out of SE Portland to Pendarvis Farm and catching your first glimpse of the shade cover lattice and tapestry woven by Guildworks across the backs of Happy Valley hills. 2015 was my seventh year of camping and carousing at Pickathon, and I always come away indelibly enchanted by the curation of artists, the attention to detail, and the pure sweetness of the entire event. If Pickathon, as its name suggests, is the cousin of the String Summit, it’s the globe trotting multi-linguist cousin, who has cultivated an exquisite and broad taste.

Of all that Pickathon has to offer, it is remarkable that they are able to engender a fun and safe family atmosphere. With a wealth of events and activities for kids ranging from Cascadia Circus Camp (where I began my Pickathon journey as a volunteer), performances designed for younger folks, and designated family camping areas make it easy for kids of all ages to roam, play, and grow. In many ways there is a full summer camp worth of activities in one weekend, and this atmosphere also lends itself to some stunning and creative young entrepreneurship.

Shuffling down a grassy trail on a blazing Saturday, I stumbled upon a straw hat seemingly cast aside in the hay, and as I approached, it began to speak. “The Talking Hat will tell you your fortune,” it proclaimed in a decidedly childlike tone. This is one of many ventures undertaken by Salvador Cerulean Sigstad, an 11-year-old veteran of Pickathon enterprises. “It’s really uncomfortable. There’s nothing but thorns under there,” he stated, referring to the ground beneath the hay he had covered himself in. The past two years he has moved on to other, less painful pursuits, and has gained a new title. “I call myself “Fire and Ice” because I take coffee and ice orders from people and deliver it to them.” he said. Business has been good enough that he hired help this year. Rowan is his first employee. “I said 30%, but he has made two mistakes and now he’s down to 10%,” said Sal. Sal also is trying his hand at “busking” with a new instrument, playing trumpet with Cahon accompaniment for passersby. He spends most of his earnings on steamers and pie, and this year could be heard whispering at tent flaps “Did you want coffee this morning?” as early as 6:30 AM. 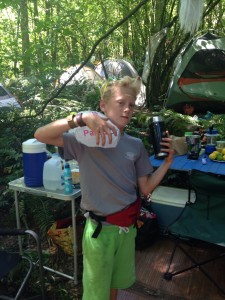 In the center of Pendarvis Farm there lay a shaded trail passing through a grove of trees, and it is here that children of all ages set up a makeshift artisans row. Perhaps the most accomplished and experienced of these is Chaim, another 11-year old boy. Chaim is the resident portrait maker of Pickathon, using Sharpies and white paper to create likenesses of revelers and artists. 2015 is his 5th year making these portraits, and he says he will probably “never” stop. He does little to no drawing or portraiture year round in preparation for Pickathon, preferring to keep it fresh. “It’s a really special thing.” He says. So far, his favorite portrait was a guy with “a really bushy beard, weird sunglasses, and a top hat.” Not only was this an interesting face to depict, but it didn’t hurt that Chaim says “He tipped me really well.” As far as artists go, Chaim is the most honest and unpretentious of the lot. “I’m not really good at drawing girls,” he says. When asked what he spends his earnings on, he calmly and coolly stated “I mostly just buy ice cream.” 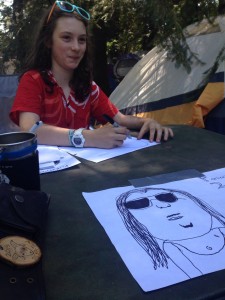 In transit to the next vendor on the row, I was regaled by the following spiel: “Let’s talk stats. An average leather wallet costs you about $50- $200 right? And it only lasts you what? Like six months? Because of water damage, you lose it… and it’s not even vegan! But take a ducktape wallet. It’s waterproof, vegan, and you can make it stick to your pocket. And today it only costs you $5.” This crisply-ironed sales pitch was delivered by Addie, a 15-year-old girl with a future in knife sales.

Jasper the Bee Man, perhaps the most professional vendor of the bunch, sits with his sidekick and color commentator Ryan “Cool Fedora Man” among a collection of honeys and Propolis he and his father have collected from the many bee hives buzzing in their yard. “A couple of years ago a beehive came to my dad’s house,” he says, and the two have continued to build on their sweet empire ever since. “They joined BeeMart.” cracked Ryan with impeccable comic timing. Jasper and his father not only ply their wares at Pickathon, but are regulars at Oregon Country Fair and String Summit, and they make some mighty floral and sweet stuff. 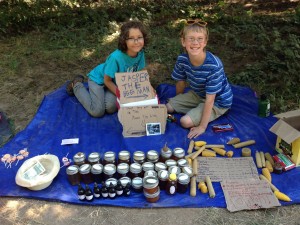 The artisans in this youthful bunch are too numerous to mention, but Ivy and Ruby Anderson sold some beautiful hand drawn cedar medallions with this year’s Pickathon goat icon on them. “They have big horns or little horns or ‘crazy’ horns,” says Ivy.   And there is another Ivy here as well. This Ivy, now known as “Pin Man,” started his career as an assistant to his brother Chaim the portrait artist, but decided to branch out this year with his own Pickathon pins. “My dad bought me a pin making kit,” he said. When I spoke with Ivy he was just about to give up, as he had sold only one pin. However, running into him later that day he had changed his tune and tactics. “I decided to get a flour bag and lay the pins out. I sold out in two hours!” Meadow, Greta, and Keanan were selling “modge-podged” light switch covers, in addition to handmade earrings, which Meadow firmly stated “I can’t really do trying on. It’s unsanitary.” 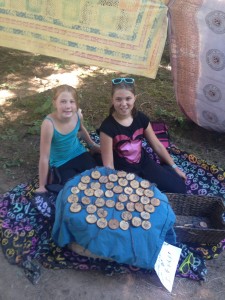 Ivy and Ruby Anderson and their cedar medallions 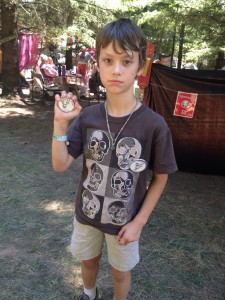 All in all, these budding artists and businesspeople thoroughly add to the Elysium that is perhaps my favorite place on earth: Pickathon. Armed with early morning coffee, sweet honey, a cedar medallion, a goat pin, and cheeks that hurt from laughing and cheering, I anxiously await another year at Pendarvis Farm.

Note: Special thanks to Juliet Howard, who assisted with interviews and took the photos for this piece.