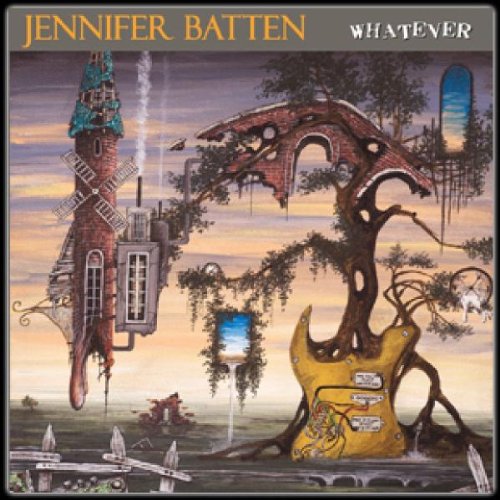 The buzz on Jennifer Batten rose from the guitar underground, and the guitar magazines promptly began chronicling her savvy musicianship and highly original approach to the electric guitar in print.

At one point Batten was in 6 different bands, playing everything from straight ahead rock, to metal,fusion, and funk. A major turning point came when she was selected from over one hundred guitarists to play in Michael Jackson’s highly skilled band which toured the world for one and a half years playing for over four and a half million people. Jennifer wasted no time after the” Bad” Tour’s grand finale, diving into work on her own album with renown producer (and Stevie Wonder guitarist) Michael Sembello. The stunning results can be heard on “Above, Below, and Beyond”, the title appropriately describing the interesting diversity within. With this debut release, the world at large learned what all the excitement was about.

Shortly after the record’s release in the spring of ’92, she was asked again to join Michael Jackson for his upcoming “Dangerous Tour”.  In January ’93, she joined Jackson to partake in Superbowl XXVII’s half time entertainment which aired to one and half billion people in 80 nations. It was the largest audience in television history.

She completed her second solo record “Jennifer Batten’s Tribal Rage~Momentum,” just before she was again asked to join Michael Jackson for his 2 year world tour supporting his double album “HIStory” in 1997.

Jennifer’s Tribal Rage project took a much different direction than her first record and is heavily influenced by world music. It is a hybrid of rock and very exotic sounds, including African percussion, Australian didgeridoo, Caribbean steel drums and Scottish bag pipes.

In the spring of 98 Jeff Beck asked Jennifer to join his band. They joined forces for 3 years on the CD’s “Who Else”, and “You Had It Coming” which were both supported by world tours.

Jennifer has authored two music books and has just released her third solo CD/DVD entitled “Whatever”.  With this 3rd effort, she’s ventured into electronica, vocal samples, and film. She’s supporting this release with a multimedia one woman show, playing guitar in synch with films projected onto a giant screen. The companion DVD includes over 90 min of art films, previously unreleased music videos, interviews, commentary, and an innovative guitar lesson.