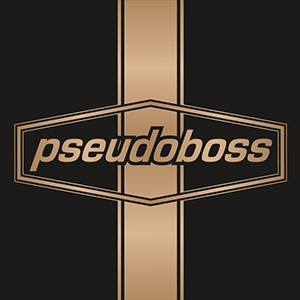 Don’t let the name fool you. pseudoboss is the real deal.

The trio, led by singer, guitarist and songwriter Noah Stroup, pulls from classic rock influences but their sound is a fresh, technical, melodic and ultra high-energy combo that is already packing venues and keeping crowds rocking all night.

Stroup, a multi-talented songwriter with a voice that’s a dead ringer for Robert Plant (his other project is as lead singer for Led Zeppelin tribute Stairway Denied), originally launched pseudoboss in Corvallis in 2008 with fellow Stairway Denied member Chris Harver and teenage whiz guitarist Conner O’Shea. The band developed a cult following but split in 2010 when the members moved to different corners of the Northwest.

Two die-hard fans, Justin Gibson and Charley McGowan, never forgot the epic sound. Gibson and McGowan joined forces previously in the heavy metal band Honest to Empire. Gibson performed with Stroup at a charity show in Corvallis and McGowan collaborated with Stroup to promote the Corvallis music scene. They both hoped to see pseudoboss re-emerge – and wanted in.

“There is this swagger the band had and the energy and songs were just so good,” Gibson said.

“I posted on Facebook, ‘Dear lords of rock, please bring back the band pseudoboss. They know not their potential to the world,” McGowan remembers.

The lords of rock did one better for McGowan and put him in the band.

When Stroup moved to Portland in 2014, he set out to recreate the magic. He tapped the furiously fingered Gibson (guitar, vocals) and storm of energy McGowan (drums) to kick around old pseudoboss songs, practicing above an old bookstore in Oregon City. The new pseudoboss was born.

The band pulled gems from the original pseudoboss catalog, along with new songs written by Stroup over the course of a ill-fated but musically productive relationship, and collaboratively rearranged them.

The trio is heavily influenced by classic rock bands including Zeppelin, Pink Floyd and Queen, which is evident in the surging, melodic sound. Stroup, a mental health therapist by day, also brings his philosophy degree and sense of storytelling into his lyrics. He said he wants his lyrics to tell a story that leaves the meaning up to the listener.

As a guitarist and mechanical engineer, Gibson draws heavily from his metal background and is masterfully technical. “I’m pretty intentional about what I do,” he said.

McGowan, also a mechanical engineer, brings a technical background along with a visceral force to the drums. He calls pseudoboss the “perfect blend of talent and drive.”

The new iteration of pseudoboss is tighter, more focused and more powerful than ever. The band recorded their first full-length album at The Magic Closet in Sellwood with producer Ian Watts (Minmae, Ape Machine). It was mixed by Tony Lash (Oregon Music Hall of Fame inductee and founding member of Heatmiser.