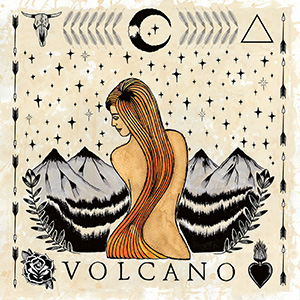 When The Get Ahead launches into “Little Devil,” their sensual groove fills the room with a tense energy that explodes into ecstatic jubilation when Juliet Howard’s Alison Moyet meets Etta James vocals start dueling with Nathan Earle’s passionate tenor. Steve Johnson’s punchy Memphis-influenced sax and Earle’s funky, chattering guitar accents complete the band’s brimstone and honey approach, one that’s driven home by the inventive rhythms of Sean Farrell’s bass and Phil Medina’s drums. The band lights up the stage and that power carries over to every track on Volcano, their debut full-length album.

“We’ve become both more raw and more polished in the last few years,” Earle says. “This record is less constricted than The Get Ahead EP we made two years ago. It’s bigger and dirtier, with more muscle in the arrangements.” The 11 songs on Volcano took shape over the last year and a half and they cover a lot of musical ground, showing off the band’s diverse influences. “We produced ourselves, cutting the tracks live, with minimal overdubs, to duplicate the energy of our stage performance.”

“No One Even Knows” is a cinematic, mid-tempo R&B tune with hints of jazz and country music. It’s the tale of a girl who escapes farm life to catch a train to the big city and become a singer in a club. Earle’s lyrical solo and the band’s dramatic stops and starts emphasize Howard’s aching delivery. The primal groove of “Could Be Better” was inspired by the short stories of Raymond Carver. It describes the feelings world of a man who is watching his dreams slowly fade away. Earle’s desperate vocal on the first verse has a commanding Wilson Pickett-like presence that gives the song a grim, dark undertone, but when Howard and Earle belt out the ironic chorus they add an optimistic vibe that injects a few bright shards of sunshine into the mix.

The album’s closer, “Dollars to Doughnuts,” is a clanging, crowd-pleasing, punk-infused rocker. Earle and Howard spit out the lyrics, while Medina’s driving beat and Farrell’s syncopated bass push the band into overdrive. As the album title promises, the songs on Volcano are full of fire, intensity and danger, with a hint of hidden secrets about to burst free to liberate the soul.

The Get Ahead was drawn together by their love of soul, rock, R&B and funk and a desire to write songs that would explore the emotions of working-class people in their everyday struggles and get people to start moving their bodies on the dance floor. “I was a roller derby skater under the name Sedusa Destroy for five years,” Howard says. “Nathan’s former partner was on an opposing team, so I’d see him at parties. We’d get drunk and sing loudly in kitchens and talk about starting a band.”

Earle and Howard began writing together, and very soon enlisted Howard’s friend Sean Farrell to play bass. “After we completed a few songs, we put up a Craigslist ad,” Farrell recalls. “We found our original drummer, Phil Medina, and sax player Steve Johnson.” The quintet clicked immediately and, in the process of honing their sound at local clubs, they recorded a six song EP – The Get Ahead. After a year and a half of writing and playing consistently, they started working on Volcano Their attention to detail and their collaborative creative process adds a dynamic strength to every song on the album. The next goal? “To continue to develop and evolve as artists, and make music we love,” Howard says. The band is already writing songs for their second album, but meanwhile, Volcano is an impressive first step on the road to what promises to be a brilliant career.
News